Positive body image documentary to be screened at Hove school 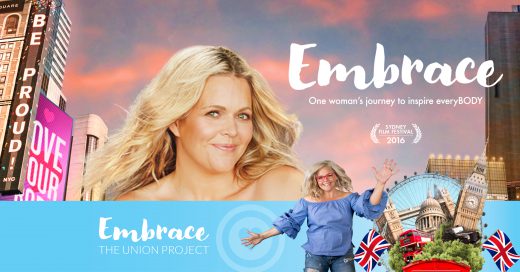 Since her daughter began school this September, This Is Publicity founder Jasmin Robertson has been involved in the school PTA and is now voluntary Co-Secretary of the school charity Friends of West Hove Infant School (FOWHIS). The charity organises a number of fundraising events throughout the year, generating funds to help support children’s learning and experiences  at school.

The next event is a screening of Embrace, a feature length documentary highlighting the issues surrounding  body image. The screening takes place at West Hove Infant School on Friday 17 November at 7.30pm and is open for all over the age of 12 to attend.

With nine out of ten British girls unhappy with their bodies and a third of adolescent boys wishing they were bigger, body image is one of the main concerns for young people in the UK.

Australian body image activist, Taryn Brumfitt wrote, produced and directed Embrace after posting online an unconventional ‘before and after’ photo of her own body in 2013. The photo was seen over 100 million times and sparked international media frenzy.

Now Embrace: The Union Project brings the film to the UK through licensing to individuals, businesses and organisations. Once 2000 screenings have been reached a team of experts will compile a study guide made free to all UK secondary schools.

Friends of West Hove Infant School (FOWHIS) will screen the film to help raise awareness of the body image movement, but also to support the campaign to introduce the film as part of the UK school curriculum. The aim is for the film to be shown to both boys and girls in Years 9 and 10, helping young people feel more confident and worry less about conforming to media stereotypes.

Embrace is told from the point of view of Taryn as she traverses the globe talking to experts, women in the street and well-known personalities about the alarming rates of body image issues that are seen in people of all body types. She interviews Ricki Lake, Amanda de Cadenet, Jeffrey Madoff, Dr Linda Bacon and Mia Freedman among others.

The initial funds for Embrace were raised via crowd funding website Kickstarter, resulting in almost 9000 pledgers donating over $300,000 (AUD). Embrace became Australia’s most successful crowd-funded documentary campaign in Kickstarter history. It then went on to take top spot at the box office in Germany, with more than 50,000 people turning out to see the film in one evening, beating Guardians of the Galaxy and King Arthur opening nights.

Embrace has a 12A rating and will be screened at West Hove Infant School, Portland Road on Friday 17 November 8-10pm including an interval. Doors will open at 7.30pm and there will be a bar and refreshments available on the night.

Tickets are £8 including a complimentary glass of bubbles, beer or soft drink. To book email Jasmin at jasmin@thisispublicity.com.